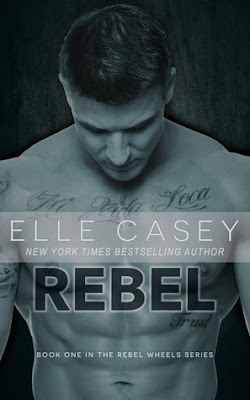 Teagan Cross discovers her father has died and left everything to his new wife. She needs a job - fast. Following rejection after rejection Teagan forces herself into the local garage, Rebel Wheels, on a trial to tidy up the place and restore some order. She forces herself into Rebel's life, and he reluctantly accepts her as he soon realises he needs her just as much as she him. But as information surrounding Teagan's father's death comes to light, she realises she is not as safe as she thought.

Teagan: She really made me laugh so many times. Her brutal honesty and constant running mouth were hilarious, especially in contrast to Rebel. She had bursts of confidence that led her down dangerous and exciting paths, but yet the vulnerable aspect to her character was evident at times. She really felt like a great rounded character - terrified of life ahead but putting on a brave face to attack the world. Her whole world pretty much falls apart and yet she's too proud to accept hand outs from her friend and is hellbent on earning her keep. I love her fighting attitude.

Rebel: It's rare to read a male character and not see the feminine writer shine through. Rebel said very little - like a usual guy, and won my heart over. The banter between the pair was hilarious, especially as he often responded by not replying at all. Also, 1 star for being a mechanic who knows muscle cars. Have to say as a car girl, it's refreshing to find a story based in a garage with a good depth of info.

Drama: There was a good underlying mystery to all of this surrounding the death of Teagan's father which added a serious and dangerous element alongside the blossoming relationship. Probably was a little bit over the top but I can't say I minded. It was a good climax to make Rebel cop on and actually make a move on Teagan.

This was a free book when I got it and I always expect them to be sub-par but this definitely surprised me. Like finding a gem among a bunch of rubble stones. It was hilarious and exciting and such a great story.