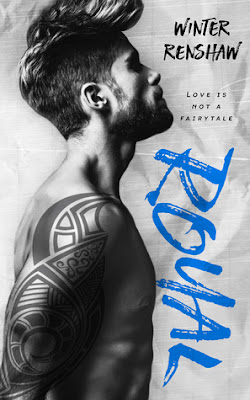 Demi has been in love with her older brother's best friend Royal since she can remember. But at 18 he leaves her family and her father forbids her from ever contacting him again. He's gone.
7 years later Royal turns up on Demi's doorstep as she holds vigil by her fiancé's hopsital bedside as he lies in a coma. But her fiancé had broken up with her before he crashed and now Demi feels she must stay by him. Even more reason to stay away from Royal... especially as she can't afford to be heartbroken again. But Royal is not going to walk away so easily this time.

In a nutshell - I was expecting more.
This took me over a week to read at a time where I didn't have a lot going on... and for me, that's a long time.

Angst: There was a great amount of angst in this and I presume the purpose was to build suspense and propel the plot but I got so wound up and frustrated. If Royal and Demi could just stop for 2 seconds and just TALK about things instead of shutting down and jumping to conclusions and making promises and gestures but never acting on it... good grief! It was exhausting.

Demi: Half the time I feel for her, other half I want to shake her up. She was stuck in a tough spot knowing Brooks had cheated on her and left her but no one else knowing she she had to stay by him for appearance's sake. But it was all going to come out anyway re the credit cards and the reported being pregnant and Demi planning on setting her lawyer father after her so why even bother keeping up the act!? Nevermind she was terrible at it, walking out of his charity event and allowing Royal to park his car - overnight - at her house! Just cut the damn strings and grow a pair!

Royal: So I liked him... sort of. I guessed in some way why he had gone away for 7 years and wasn't far wrong. But I didn't like how he shied away from just being honest to Demi. He deserved for Pandora to go and tell Demi before he did. He wanted the best of both worlds - to walk back into Demi's life with NO explanation - "yet" - but immediately pick up where they left off...

Story: It was focused a lot on Royal trying to win back Demi but I skim read a lot of it. There was drama involving Brooks and his affair and manipulation of Demi. For a book with a lot of dialogue there was very little said and I lost interest quite quickly. Neither Demi or Royal were willing to discuss actual issues or their situations - but they were willing to rekindle their long lost relationship physically while Demi delved into a battle of if she could trust him or not...

This just wasn't for me. There was too much unsaid and it caused immense frustration and annoyance beyond the usual tension level.