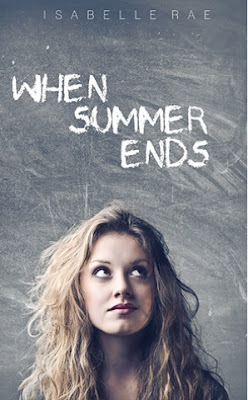 Chloe meets Will the bartender after getting into a club with fake ID. After stepping up to help him make drinks, the pair can't keep away from each other. Chloe meets his family and believes she's found the one and ends her summer on a high. Until returning to high school and Will walks in as her new teacher.
Immediately he ends things with Chloe, crippled with guilt of dating a student. But Chloe  won't give up on them and will do anything to get a second chance. And as much as Will knows it's wrong, he can't forget the girl he fell in love with over the summer.

Chloe: She is so immature I really don't see how Will falls for her but anyway... I don't like how she played games and jumped to conclusions. I didn't like how she involved Ollie just to make Will jealous, even though Ollie got overly possessive about all of her male friends, I just felt bad for Will and didn't think it was fair to play with Ollie like that. She overreacted a lot and didn't even want to adhere to Will's plan of putting space between them. Just wished she was a bit more mature about it all.

Will: I can see why Chloe falls for him but at times I wished he'd see what he was doing. For starters, obviously I know student/teacher relationships are illegal so when he discovers the truth I appreciate his efforts to end things, even if it means hurting Chloe despite really caring for her. But he often tells her to stay away but then is the one to initiate contact with her. Then when he realises she was underage he becomes overly dramatic about going to jail and how wrong it all was, which again, great he sees the seriousness of it all, but then still continues to see her. But the story would have been pretty short if he sat her down and just said 'wait until graduation' (which he did) and everything went to plan.

Story: I am a sucker for the forbidden/taboo romances. There's always something exciting when there's the risks involved. In this case they met each other outside of the classroom, meaning Will really falls for Chloe believing she's older and welcomes her into his family. When he discovers the truth, he tries hard to end things, but neither can deny their attraction. This causes a string of turmoil and heartache and ultimately drama, as the pair try to get on with things in secret. I didn't understand the need for Nick's character. Although he's Chloe's ex, I don't understand how someone would willingly set his life aside to support her when he thought she was pregnant.

Although it wasn't the best story of its kind, and rather cliché, I was still hooked and rooting for them to pull through. Recommend for those who enjoy these type of stories. Relatively predictable but enjoyable.