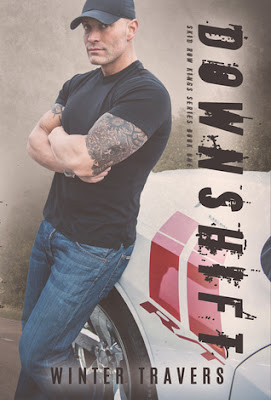 26 Y/O Violet Barnes is on her own. Since her parents' death she has built her own life and keeps herself to herself. A book nerd, she works in the library to earn some money and fulfill a passion.
Luke Jensen owns the local garage, where his two brothers work, and his younger teenage sister Frankie lives. Luke doesn't have time for innocence and vanilla, whilst Violet doesn't care for Luke's arrogant facade when she meets him through Frankie. But their stubborn arguing soon brings them together and they fight to be with each other, despite having opposite pasts.

As a car girl I love any romance involving racing and cars and long to find an author actually showing knowledge about engines and how things work when a pivotal character has the hobby... in fairness to Travers, that was well depicted in this novel.

Characters: I don't know why, but I couldn't connect with Luke or Violet. At the beginning I loved their chemistry and was hooked, but about a third of the way in I lost focus completely. Violet was 26 and I couldn't relate to her level of innocence at all. If her age had not been divulged, I would've guessed she was about 17 or 18 judging by her maturity. Frankie was integral to Violet meeting Luke, but she seemed to only re-appear when convenient for a plot twist or further drama. Luke will not be making it onto my book boyfriend list. I didn't find him charming or anything redeeming about him. He seemed to do a 180 too quickly for it to be believable from going to having one night stands to being devoted to Violet, even though we did get some mental battle.

'"He beat York off the line and stayed ahead the whole race."
"That's good, right?"'

Is she serious?! Pretty sure everyone knows the person who stays ahead in a race wins!

POV: Dual POV can work really well... or be detrimental to the story. Sadly, in this case it was the latter. There was no added value having the insight into Luke's mind and the writing was not distinct enough to differentiate between characters. A reader should be able to tell who's POV it is without being told IMO. This is a common find among the female writers and although it probably doesn't bother 99% of readers, it's one of my pet hates. The thought process and mind of a male is entirely different to that of a female, and Luke showed too many female thinking patterns.

Romance: The initial chemistry between the pair drew me in and was electric. But then it all sort of fell by the wayside and felt strongly amateur. I cringed at most latter conversations or romantic scenarios between them both and sped read a lot of the remainder of the book. Luke calls Violet "Princess" throughout, but way too often for it to be endearing.

There was a lot of pages of pure dialogue that held no meaning or substance. With this, there was also a lot of tell after the reader was shown. Authors need to have faith in their readers picking up on subtle nuances and double-meanings rather than over explaining everything.

If the main characters are late twenties to thirties, I expect some maturity and advance in the writing style. I felt like I was older than them all in this book and it made me lose interest.

I wouldn't recommend this book. There were too many minor issues for me that disrupted the effect of the story and I couldn't get swept up in their romance. However, majority of people are giving this 5 stars, so if the issues listed don't bother you, than maybe it will be your sort of thing.