REVIEW; In Too Deep (Roomates Trilogy #1), by Mara Jacobs 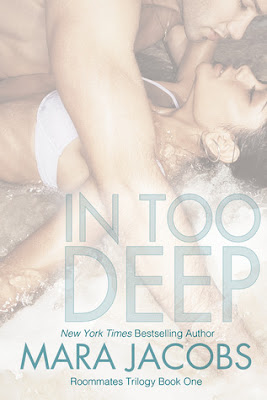 Lily Spaulding, daughter of a political consultant, is a freshman at an elite college , sent to keep an eye on her room-mate Jane and keep her out of trouble.
But Lily may be the one needing help to stay out of trouble... When carrying out her swimming lessons with young kids, she notices Lucas Kade, older brother of one of her students, Andy. As soon as she sees Lucas, she knows she wants him and can tell he feels the same way.
Lucas has a dark past and is trying to stay on the straight and narrow to be a good role model for Andy. But when push comes to shove, can Lucas ever rid himself of his past? And where does Lily fit in to his life?

This book had me crying - out of despair and from laughter.

Note: Although part of a trilogy, still a stand-alone book. Next in series focuses on different characters from this book.

Lily: Lily is the daughter of a political consultant and comes from a family of money. She fits in with the stereotype student that attends her college. However, she doesn't want to be there - she doesn't want to have to look out for Jane and keep her out of trouble and instead befriends Jane. I liked her from the start: I loved her daring attitude and confidence that she had when around Lucas but also her loyalty to her friend and backbone to stand up to her father, is all truly admirable. It frustrated me so much how much a loyal person she was when she wouldn't break her promise to her father!!! But overall, she is a heroin that you can't really fault for much. She never created petty or insecure drama and always remained so level headed throughout everything.

Lucas: Mmmmm...Ultimate Book Boyfriend from the start. He's probably one of the best angst/troubled/bad boy in a novel written by a female. He never went overboard with mushy talk or steered clear of it completely - he actually acted like a genuine love-struck 21 year old who didn't know how to react to his feelings. He didn't automatically profess his undying love in a grandeur way, but still got it across fairly easily... hard to describe but when you know how a lot of guys his age act and read NA, it can be a huge downfall if the love interest is too "fantastical" and not realistic enough.

Insta-Love: I hate insta-love. I always moan about it and unfortunately this is how their story begins - literally love at first sight. It was probably more lust at first sight than anything more but either way... A little bit annoying none-the-less. Especially how it all just worked out from the beginning and there was no cat and mouse chase - they both just presumed the other was game. It just took away from believing their love was real as it all was a bit too quick. There was good tension and build up to when they finally got together, but even still, I feel this could've been so much more exciting if there was more story between the Locker Room Saga and The Graffiti Wall.

Story: As a story overall though, I enjoyed it. Typical opposites attract and good girl/bad boy drama, but it had its own originality and twists. Even Lucas with his past, it wasn't that predictable and showed that he wasn't actually a bad person or had a really traumatic rough life, although still had it bad. There was a very good balancing of the supposed "bad" and "perfect" lives both Lucas and Lily had so it helped blend the dichotomy of them being total opposites.

5-Stars?: I think what was missing for me was just "more". I wanted more insight into Lily's life other than the random glimpses we got from phone-calls. We found out so much about Lucas, but hardly anything about Lily. As already said, I would've liked to have seen a better build up between Lucas and Lily rather than mutual assumption their feelings were reciprocated. Also, there wasn't really a lot of drama and when Lucas got into trouble again, I expected there to be more hostility from Lily - although she understood his circumstance, I don't think an 18 year old hormonal female would immediately get it. There needed to be just a little bit of anger or annoyance or some repercussion... but maybe that's just me seeking more drama. I just felt my tears of sadness hadn't even dried when they got back together so didn't seem like a lot of drawn out misery.

This is exactly what it seems - a fun, exciting love story between two people seemingly not meant for each other. You get sucked in from page one and the tension and lust will keep you up reading for hours until you're finished.