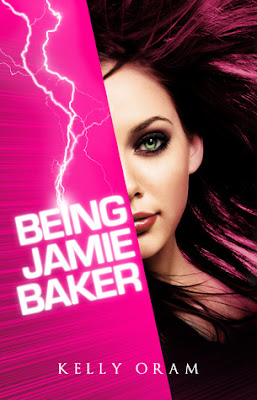 Jamie Baker is the Ice-Queen or freak. After being in a car accident, Jamie managed to survive but changed forever. Jamie has been left with superpowers- she has super strength but when emotional, is alive with electricity. Socially exiling herself has worked well for Jamie, until she meets Ryan Miller.
He is determined not to give up on her and break down her walls. And she needs him more than she cares to admit.
But when Jamie realises she is facing a danger much bigger than being exposed, she has to risk everything, including the lives of those she loves, to try and protect herself and them.

I loved Kelly Oram's "Cinder & Ella" and fell for her cute writing style and adorable romances, so as soon as I got this book, I began reading it immediately and sacrificed many hours of sleep (which is serious business when you're up at 6am) to just read "one more page".

Jamie: She had her flaws, but I did like her. I'm quite a sucker for Project Break The Ice Queen and Jamie made for a good one, although a bit of bitch. I liked her humour and how she was with Ryan, and loved how they both interacted. But her negativity and moping got a little teeny tiny bit thin quite quickly. Personally, I've I'd been graced with her powers, the first thing I'd investigate is how they can be controlled/ used. Jamie however, she had no interest in learning how they worked until she met Ryan. It seemed like such a waste!!  Granted, she'd been through hell and back with her accident and everything with Derek so she had all the reasons in the world to be sad, but some time has passed and I felt like she needed a little bit more umph and positivity just to have a life with her parents - but still remain an Ice Queen in school.

Ryan: He's sweet, caring, genuine. Hard not to fall for his charm and humour but a little annoying. As with a lot of YA/NA novels, it's first obvious Ryan is from the imagination of a female. He understands Jamie too much and cares too much and has too much emotional connection and emotional knowledge to be a typical young guy. Sorry, they just don't exist like that. He was quite disrespectful at times with not acknowledging Jamie when she said no at the beginning, before they were close (but that could be down to Jamie saying one thing but meaning another.. I don't know). He's just not going to make it onto my book boyfriend list any time soon...

Superpowers: Jamie is not a superhero... she doesn't really do anything heroic apart from once. But she does have superpowers, which she has no interest in! I was really interested in her different quirks and abilities and enjoyed watching her practice with Ryan on how to control and manage them. My issue arises with the accident and how she got her powers. The whole drama surrounding the accident and Derek seemed like an afterthought quickly sketched in to enable the story some depth.

Story: Not going to lie, I was hooked from the beginning with this. I loved watching Ryan dig deeper to try and figure her out and reveal Jamie's story. As per, the high school diplomacy was on point, with the usual rivalries and jealousy. One MAJOR issue in this book, and mainly why it lost a star - rape. In this, a side character gets raped by one of the popular guys. Jamie finds out and just warns him not to do it again... uhh... what? I recognise the influential powers authors have over their readers, and I think when such a sensitive topic is included, it shouldn't be done lightly and should also have proper conclusions. But in this it was just sort of dropped in like a bomb and then both characters ended up eating lunch together... riiiight.
Classified as a romance, it does make for a cute love story. Of course, it's predictable but it doesn't run seamlessly for them both so it does keep the reader interested.

There's also the added danger of Jamie being stalked by a reporter and questioning his motives. Does he want to expose her for a good story? Or is he trying to sell her out to a research company?  I enjoyed this level of danger as it added another dimension to the story just being centered around Jamie and Ryan.

This isn't a deep or heavy story, just a cute little romance with a really original paranormal twist. It's exciting and fast paced and definitely hooks the reader with an unforeseen added element of a greater danger. Definitely recommend - I can't wait to read more!