REVIEW; The Truth About James (YA Series #2), by Sarah Tork 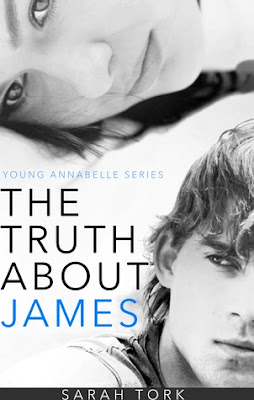 Annabelle is still losing weight but that's become the lesser of two battles. Having fallen for James just before school started, she now returns to see him at the height of popularity and mixing with the Queens.

He doesn't want to let go of her, but Annabelle struggles to believe he really wants her when she sees him flirting in school and doesn't include her in his plans. He always has an excuse and Annabelle wants to believe in him, but as he continuously lets her down, can she find the courage to to walk away for good?

I was glad I had this to read right after finishing Young Annabelle having felt like it wasn't a complete story.

Annabelle: She was a lot more frustrating and pathetic in this book. James was her weak spot and I understand how she kept letting him back into her heart and although it was annoying to read again and again, it was realistic and we're all guilty of it. But I hate when people jump to conclusions and it was all she did consistently throughout despite having sworn to trust him. I didn't feel for her as much in this as I had previously. She played Dean as well and that wasn't cool either. Both main characters in this just weren't likable in the least.

James: Ughhhh... sorry but no. All his smooth talk and charm that won Anna over was just awful. I didn't care for him at all. His texting was that of a child and I couldn't imagine a male being so drama seeking. The conversations of them going back and forth were just annoying with the petty "I don't care" and "I'm done with this" blah blah. They did more superficial arguing than actually working anything out and getting to the point. He was so disrespectful and arrogant, wanting a relationship with Anna but then not confiding in her and telling her of his plans and blaming her when she asks him about where he's been. When Anna did walk away he'd rock up the next day as suited him and act like nothing had changed between them.

Dean: Ahhh.. I didn't like him much at first as he just seemed like a player but he definitely had a lot respect for Anna. He had his flaws but he showed emotion and a real care for Annabelle and I was sort of rooting for him to really show up how crap James was.

Jenna: I loved her so much. She was a brilliant best friend and spoke so much sense. She was such a crucial person for the story as she was the voice of reason reminding Annabelle of what she deserved and what she was worth, which is an important message to relay in a story like this, as Annabelle followed her heart rather than her head.

Story: Meh, there isn't much depth in this at all. It just childish arguments throughout. The texting was frustrating with the wrong grammar. Often there were exclamation marks in replacement of question marks. The same phrases were thrown about and even conversations on repeat.

I wouldn't really recommend this. It's rather childish and just typical and predictable drama with little depth or story to anything. I still stick to my original view when finishing Young Annabelle, that all of this was too broken up and thrown together. It all would've flowed a lot better being the one book.