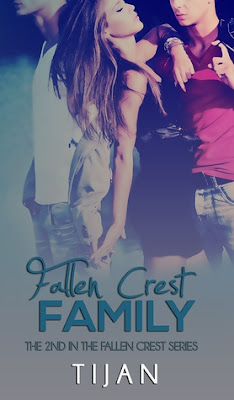 Mason and Samantha are as strong as ever - and deeply in love. Whether or not people approve, they are meant to be. But Sam's mother is determined to keep them apart and control Sam's life.

Doing what she can to maintain her relationship, Sam also has to deal with jealous bitches getting inside her head due to her association with the Kades.

Turning to running as her escape, Sam has to be as strong as ever and battle through all that life throws at her, especially as soon Mason will be gone to uni, and Sam will have to cope by herself. Can their love, and Sam, survive?

Ahhhhhh!! My God!!
I loved Fallen Crest High and Tijan jumped to my list of favourites so I was so excited to finally get the chance to read this!

Sam: Why are people beating her down so much? Yeah, she was so bad-ass and strong in Book 1 - but, come on!!! She has so much to deal with, and her mother is so crazy and is doing whatever she can to destroy Sam and Mason. Sam is pretty much hated and targeted in school and every day is a battle. So, yeah, she gets upset and emotional at times, but I still think she is just as bad-ass as before. People need to remember she's 17 - how would you react in her situation? I understand her penchant for running as a release, but 4.5 hours on a whim? That seemed a little far-fetched when doing daily.


Story: I'm not really too sure what the big story here was... It seemed a little lost at times. I would have preferred some more emotional intimacy between Sam and Mason though instead of always physical comfort. There were some aspects that didn't really add up as well. If Sam was only 17, is she legally allowed to work in a bar? And then Heather and her brothers owned it but they were around the same age as Sam... But I don't know American rules!


Writing: I love Tijan's writing style. I just fall so easily into the story and become completely invested in her world within the first paragraph. Any twists or drama are delivered in such a gripping manner and the story flies.


Characters: The Kade brothers are amazing. Mason is fantastic but I think I'm starting to prefer Logan. His affection for Sam is adorable and how much he wants to protect her. I love the mix of humour with angst they carry. It's also refreshing that we're reminded occasionally of the darkness they come from - they're not bad people but they do go around the law and there is a slight fear of them - making them so much more attractive. There's also a good character development. Sam was once a lot tougher but clearly times are taking their toll. Mason and Logan are tough as nails, but they have a sensitive side which reminds you their human and real.

This is my favourite series. I love everything about it and the characters. A great second book but I feel it's one making the way for a great third book! A must read and if you haven't started the series then you definitely should!