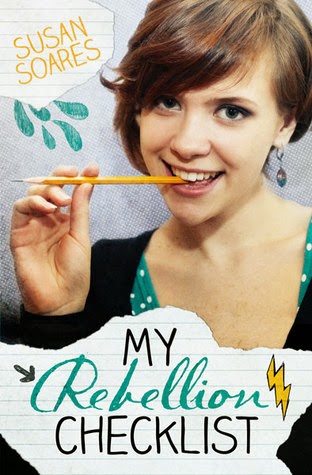 Victoria feels like her life is falling apart, her parents inform her they're getting a divorce as she's recovering from a car accident and her relationship with her boyfriend comes to an end. Constantly living her life to please her parents and stuck in her ways, she decides to break free from routine and set out to change herself.

Creating a list of changes, including her name being shortened to Tori, getting a tattoo etc, she sets out to find herself and become her own person, regardless of the opinions of everyone else.

Soon she realises that Finding herself doesn't necessarily mean going to extremes and maybe she didn't have to go too far to discover who she wanted to be.

My Thoughts:
I really loved the idea of this story and how true and focused it remained on Tori’s rebellion. So many novels try to fit in multiple story-lines; however this really kept to the singular plot and was expanded and built upon really well.

Loved;
Tori’s character was one of the few I’ve read about that I feel I can relate to a lot. She’s stuck in her rigid planned ways and wants to break free of routine. I like how her list went beyond the simple appearance change and enjoyed accompanying her on her journey to just get lost and find herself. Her internal battle with her own mind, especially after her mom kept upsetting her, was quite an emotional rollercoaster but wasn’t exaggerated. One can understand why she turned to Adam after suffering rejection and why she decided to run the red light.

The plot was focused around such a simple idea- a rebellion list. You wouldn’t think you could centre a novel on such a small choice but the simplicity of the decision was crafted really well to make the novel, e.g. quitting working for her dad which lead her to the Pizza shop, leading her to ultimately completing her list. It all just flowed effortlessly with the subtle connections.

The characters were all extremely real and credible. I think Rebecca really stood out to me as she was clearly Tori’s best friend and had her best interests at heart but the fact she was hurt and affected by Tori’s extremities (like getting a tattoo, running the red light) really emphasised her love for her friend, rather than being the stereotypical best friend that just supported anything and everything.

The romance element to this was beautiful. Tori and Zack’s instant chemistry was palpable but it wasn’t over-kill. They had a flirty close relationship but Zack came across like a genuine guy and not some “book boyfriend” that seems to perfect to exist. Their relationship wasn’t made a core feature of the novel that took over but was subtle enough that you were willing something to happen between them.

Overall, I think this was a really great read. The idea was so original and quirky and the whole plot flowed really well. All the characters had their idiosyncrasies and really stood on their own with strength. I really loved the introduction of the novel with Tori being on her way to hospital; it captivated my attention immediately and laid out the foundations of the novel with a solid start. The novel continued on the high level it began which is a definite plus! Will definitely be recommending.

Thank you to the author for letting me Advance Read & Review this novel!