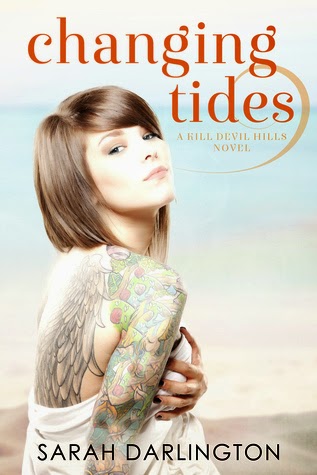 This second Kill Devil Hills novel focuses on Ellie Turner, Georgina's older sister. Ellie is a lesbian and a tomboy and has never been, nor wanted to be, with a man. However, when faced with the opportunity on an aeroplane to experiment with the famous alpha-male actor Nate West, Ellie quickly questions everything she believed about herself.

Nate West has had his share of heartbreak and is a Hollywood badboy to the core. Travelling in disguise to avoid recognition the last thing he wants is a romance. But when tattooed confident Ellie strides through his life in a fleeting moment, Nate is left lost without her.

Throw in the typical family drama, Ellie returns home left wondering where she stands after her time with Nate. They both confirm their deep connection whilst battling their personal issues and working out if they're truly compatible at all.

My Thoughts:
After reading the first novel recently I was apprehensive as to whether the second installment could follow. It definitely didn't disappoint.

Georgia and Noah, who I loved, still feature so their love is continued through Ellie's story.

Ellie: Ellie was a character I loved in the first novel so I was so excited to read from her point of view. She has such an effervescent and genuine personality and I admire her morals and spunk. I liked how she was so confident and sure of herself and then suddenly one incident made her doubt everything she'd known. Her reactions to everything that happened seemed so realistic and believable whilst her doubt and confusion was palpable.

Nate: I loved him for the most part but I think the stereotype got a little in the way. He is a Hollywood bad-boy and has definitely played the field after a heartbreak. But as soon as he got acquainted with Ellie he wanted more than he'd ever had. I think personally I don't enjoy the "instant love" and whilst it wasn't a love at first sight scenario, there was a hint of it being too much too soon. In saying that, how he viewed Ellie was so endearing and sexy to read and he's someone you'd love to meet in real life.

Story: LOVE LOVE LOVE! Full marks for originality with this one. I've never read anything like this and both characters had confusion to battle with. Their connection was so strong and written in a such a beautiful manner that drew the reader in. I quite liked how Ellie was thrown off her feet. It's comforting to read about a character who feels they've everything under control and then they meet someone that makes them question all they knew about themselves.

There's no silly love triangle or stupid misunderstanding that there tends to be with Hollywood romances; it's all solely based around Nate and Ellie battling their internal issues. Their romance and connection is probably my most envied that I've ever read, even more so than Noah and Georgia. Everything between them, their interactions, sex, humour, it's all raw and candid.

Overall; I thoroughly enjoyed reading this. I love Ellie and was rooting for her all the way with whatever she chose. This is such a strong second installment of the series and I look forward to reading more. There is a brilliant dichotomy of suspense with romance and drama and it all balances beautifully.


Thank you to the author for allowing me advance read & review!