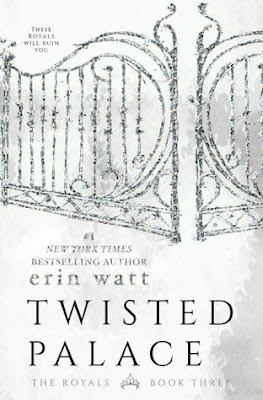 Ella has finally found a family and is loved by them all - she has never known happiness like it. But her boyfriend's stepmum has been murdered and Reed is the main suspect, with evidence stacking up against him. Amongst it all, Ella's father, previously presumed dead, has turned up and is trying to make up for lost time. Ella doesn't want to move away from the Royals and live with her father, and is terrified of losing Reed as she tries to do her own detective work into the murder of Brooke.

Drama: This followed straight on from the cliffhanger of book 2, so there will be spoilers in this review. Ella finds out her father is alive and her boyfriend is the prime suspect for murdering his soon to be stepmother. I thought the plot was going to be predictable and the final installment would not live up to the expectations of the first two books - and this was sort of true. The drama towards the end saved the book overall. I felt at times it wasn't too clear where the book was heading and then for the final climax, it all seemed a little rushed and then just tied up nicely with a bow to finish. It is quite a slow burner, but there is a lot of mystery that kept me reading.

Ella: I really like her character and her strength and we definitely see a more vulnerable side of her. She is wary of letting her father just waltz into her life and goes back to her default of fending for herself. It was so heartwarming seeing how she clearly views the Royals to be her true family after everything. Now, that being said - she annoyed me a little. I'll put this down to being a 17 year old girl but I didn't like how she flickered between believing and doubting Reed. Considering the amount of love they had for each other, I'm sure even if it were possible she would be blinded by love and be in denial.

Romance: Meh. Ella and Reed finally do the deed but meh, Wasn't that interesting or exciting and just felt like it was all at the wrong moments for their personalities. Oh well.

The Royals: I loved watching how their family dynamic changed and adapted due to Ella's presence. They really became a loyal unit rather than dis-jointed as at the beginning. They may not have been the average representation of family, but they were a great example of how a family acts, and it was beautiful seeing how a young girl could make them grow.

This was a perfect ending to the series. Everything was finished up nicely with a satisfying end to the overall plot. Such a brilliant series and recommend it for both YA/NA readers.