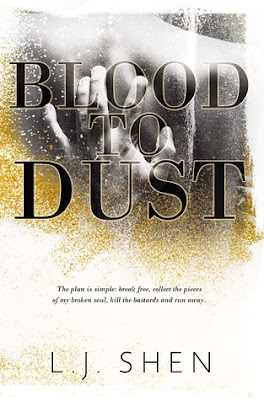 Prescott is fighting to stay alive, when she is kidnapped by her ex's father. She is thrown into a basement and kept hostage by two men. Her days are numbered, knowing she will be murdered when her ex arrives back from the UK, so she has to work fast. Beat, one of the kidnappers, has a sensitive side and Prescott targets this. Through charm and flirtatious actions, Prescott aims to get Beat on her side so she can win and be free. And then murder her ex and his father for targeting her.

I haven't read anything else by this author but the blurb given is so vague it really piqued my interest - and I was not disappointed.

Prescott: She once had it all. But her mom went AWOL. Gay brother missing. And betrayed by her father. Now she is on her own, out for revenge. She is by no means a weak victim and I loved her for this. She was a badass strong heroine and it was refreshing to see how she fought back.

Nate: "Beat" is also quite badass with a rather dark history. Caught between a rock and a hard place, he owes Godfrey and this is in the form of keeping Prescott down in his basement and not to go near her. If he obeys, he lives. For Nate, this is simple. Or not. He has murdered and he has been violent, but he isn't really a bad guy - he would never hit a girl. He has standards. And after seeing the torture Prescott endures and her determination to not give in, he begins to admire her and question if his loyalties are in the right place.

Story; There is a lot of violence, abuse and pain - so not for the faint hearted to read. However, the writing is wonderful and the story of the characters is intriguing and addictive. The story is presented to the reader as a countdown to the day Prescott will be killed, and the constant tension and suspense is palpable. Eventually, Prescott and Nate realise they need to pair up and fight against the same enemy, and their journey is brilliant together, as they fight so hard to trust each other but can't break old habits too easily.

This wasn't a story- it was a journey of freedom and breaking free from the safe constraints to trusting someone with your life. Both Nate and Prescott are used to life on their own, but if they want to survive, they need to trust each other - a foreign gamble to both of them.